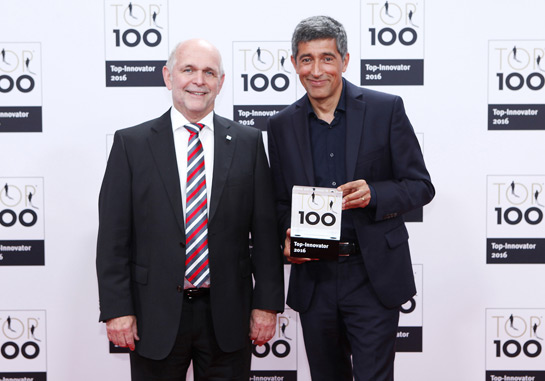 The 23rd Top 100 awards for Germany's most innovative SMEs are about to be presented, and this year, the iwis Group is joining this elite group. The Munich-based firm took part in a rigorous, scientific selection process that analysed innovation management and successful innovation. Ranga Yogeshwar, the competition mentor, will present the top innovators with their awards at the German SME Summit in Essen on 24 June.

The iwis Group's precision chains are keeping the world in motion: the company from Munich supplies its innovative drive systems to virtually every automotive manufacturer around the world, and also counts companies in the printing, paper and packaging industries and the mechanical engineering and agricultural machine construction sector among its customers. The Top 100 award winner scored highly in a number of different assessment categories.

"The art is simply in coming up with an idea," said Johannes Winklhofer, Managing Director and the fourth generation of his family to run the firm that was founded in 1916. The innovation process starts with a creative workshop, in which employees, together with customers or suppliers, set themselves a specific task. Creative tools, such as morphological boxes, help with the generation of ideas: at the last count, half of the company's 1,400+ employees had submitted some 2,500 ideas, of which approximately two thirds were realised.

The iwis Group is primarily interested in topics relating to the future, such as what will a combustion engine look like in 20 years' time? This is just one of the core questions, the answer to which will provide the building blocks for a product roadmap with milestones. Each year, around 40 new projects are at the development stage. "We are very focused on looking for ideas, including those at the radical end of the spectrum," explained Winklhofer. An example of this is the company's revolutionary changes to a coating process of some 80 years' standing: an innovation that allowed it to leap ahead of all of its competitors. The company's success speaks for itself: some 50 per cent of the iwis Group's recent revenues come from market innovations and innova-tive improvements that it has brought to the market ahead of its competitors. In the past few years alone, the Bavarian firm has registered approximately 80 German and international patents. "We want to go places, and not just with our precision chains," declared Winklhofer. "And we're on the right track."

This year, more than 4,000 companies registered an interest in taking part in the Top 100 competition, with 366 of them applying for the qualification round and 284 getting through to the finals. Ultimately, 238 made it into the Top 100 (maximum of one hundred in each of the three size categories). Once more, the companies were evaluated by Nikolaus Franke, Professor of Entrepreneurship and Innovation at the Vienna University of Economics and Business Administration, and his team. They examined more than 100 parameters in the following five assessment categories: 'Innovation-friendly Senior Management', 'Climate of Innovation', 'Innovative Processes and Organisation', 'Innovations Marketing' and 'Successful Innovations'.