Home › About us › News & Events › A belated surprise
‹ back to overview 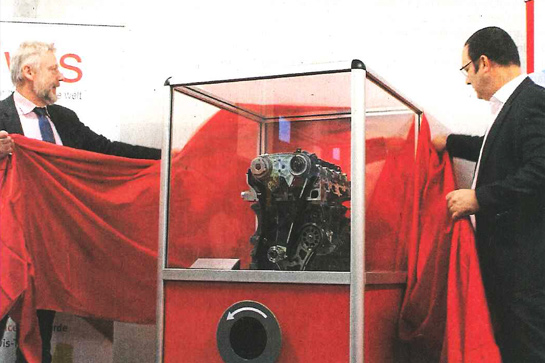 It was supposed to be a surprise: last week, iwis gave Detlef Zimmermann, head teacher at Johann-Winklhofer-Realschule secondary school, an engine as a rather belated present. The unusual gift, which iwis apprentices had dismantled and then reassembled with parts they had made themselves, is intended to show students at the school the mechanics of a car engine.

Ulrich Bach, one of the three directors at iwis, conducted the presentation ceremony. The company and the school have already collaborated on a number of projects in the past, such as the annual Girls Day or open days for apprenticeship-seekers. "You are our company’s future”, Bach told the assembled students. “In today’s fast-moving world, situations can change three times a week.”

The engine was built by iwis apprentices under the project name “BMW Engine 6”, a direct reference to the engine itself, which powers the BMW Z4, for example. After completely dismantling the engine, the apprentices reassembled it according to prepared drawings and using parts they had ordered. They gave the project a unique personal touch by painting the engine in the colours of the iwis logo, as well as commemorating their work with their engraved initials, the company logo and the emblem of the school. They also took care to ensure the safety of students and the service life of the engine by fitting a protective cover over the engine and a large hand-turned disc as the “driving mechanism”. A clutch is also fitted, so the engine can only be turned in one direction and cannot be damaged inadvertently.

The iwis apprentices carried out the project from August to December, and as the engine parts were already available, it only cost around 2,500 euros. It would have cost up to 10,000 euros to build it from scratch.

“It was intended as a surprise, actually”, said Bach. The engine was supposed to have been finished by the time the project started and was meant to be a surprise gift to mark Zimmermann’s official start as head teacher on 1. August last year.